I’ve lived in Chicago all my life and winter weather — including snow, ice and bitter cold — is something we just learn to live with. However, this year’s temperatures have challenged the hardiest of us. I honestly cannot remember a time when sub-zero temperatures and wind chill hit 50-below, when the Post Office announced it would not deliver mail and the garbage trucks simply stayed put and these lapses had nothing to do with two feet of snow on the ground.

As my grandson would say, it’s been epic!

Although we have certainly been able to get out for groceries, go to the gym, meet friends for breakfast, lunch or dinner, we have often done so in bitter cold or sloppy snow. With boots, gloves, hats, and scarves. This is fun and adventurous early in the winter, after a few months it gets old, at least for me. Most of all, there have been too many days when we just couldn’t go out. When no one could.

Cabin fever is no joke. 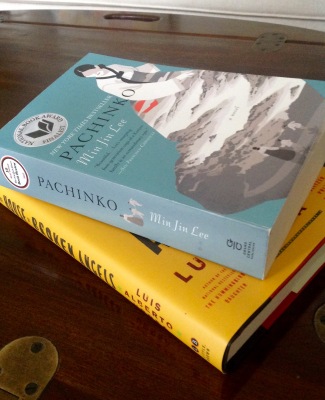 When I look back at what I have done lately, most of it has been centered on coping with cabin fever. First, of course, I read. Pachinko by Min Jin Lee was a book club read and, like so many of them, it pushed my typical reading choices. This multigenerational story about Koreans living in Japan (where they were viewed as second class citizens) recounts one woman’s life decision and the repercussions on her family for generations to come. I knew very little about the history of either country, so this was especially eye-opening for me. Pachinko was a little tough starting, but ultimately a compelling read.

Then I read Eleanor Oliphant is Completely Fine by Gail Honeyman. Never assume. This was appearing on so many reading lists, I thought it would be one of those best seller/easy/fun reads. It was all that, but more. Eleanor is way more complicated than the heroine I was expecting. Yes, she has an amusing lack of social skills. Then she crosses paths with co-worker Raymond. (I know, this is sounding contrived, right?) Slowly, their growing friendship begins not only to reveal her terrifying past, but also the importance of human connections.

I’ve moved on now to House of Broken Angels by Luis Alberto Urrea. I’ll keep you posted, but so far, so good. 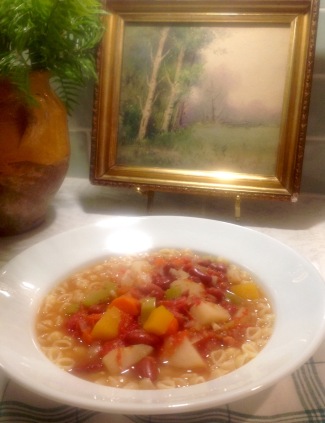 In fact, I cooked so much I had to start passing out “samples.” I made Ina Garten’s Winter Vegetable Soup twice in one week. It was just that good! I made the first batch per all of her instructions, minus the pesto which I did not have. The second time, I tweaked the recipe a bit, substituting potato for some of the squash. It was just as good! (I did take Ina’s suggestion to use homemade chicken stock, and I do think it makes a huge difference!)

Since we really can’t live by soup alone, I also made beef burgundy and a batch of meatballs. I would have continued, but the freezer was quickly filling with the soup, homemade stock, etc.

So I turned instead to decorating…

And I re-hung this gallery in the stairway to our finished basement. I am the only child/only grandchild and therefore keeper of family photos. My mother-in-law also passed along boxes of photos to me. These riches are compounded by the fact that my dad was quite the amateur photographer. He had a small darkroom in our house and he enlarged/cropped and otherwise tweaked his own photos as well as old negatives that my mom unearthed. It was a lot of

fun for all of us. But it also resulted in a lot of photos. I’m really drowning in prints, often multiples of the same image (though I am increasingly successful at weeding those out!).

Some of these have been hung here right along, some have been displayed on tabletops, others were stashed in the back of closets, behind dressers, under beds — you name it. Would it surprise you to learn I have a few more to add to this? My goal has been to save the best and get rid of the rest. Let’s just say I’m making progress.

And, yes, I’ve spent far too much time this winter on social media, which for me is Instagram. I’m sure I’ve mentioned before that my IG feed is pretty narrow, no celebrities, few FaceBook friends, a lot of designers and lifestyle bloggers. I’ve saved some screenshots, so I could share my favorite finds.

Anyone who has successfully grown a geranium in a porch pot is desperate for spring and the garden season after a winter like this. If you love gardening or decorating, I encourage you to follow Jenny Rose Innes, from Bowral, Australia. Her home(s) are stunning and her gardens beautifully lush. I was initially struck by the brick path in this image (I love the way it periodically cuts into the beds on each side), but I also thought that if my garden just looked this good in green, imagine how it would look when those plants bloomed! 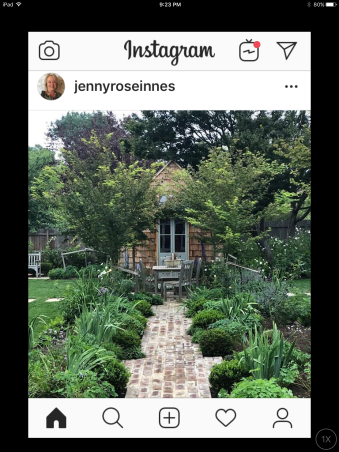 I often think that “go big or go home” is a good rule in decorating. Look at the impact this big but simple bucket of lilacs has on this room. It’s not overpowering (though the fragrance must be wonderful), it’s placed to be seen but not in the way, and it beautifully balances the stone wall, wood floor, and baskets. 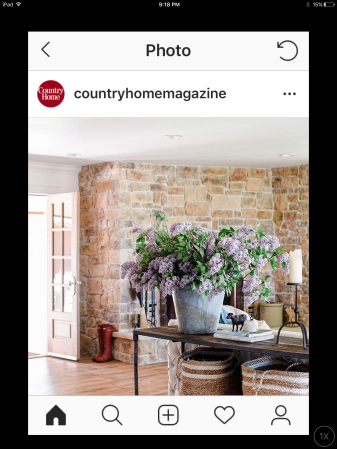 Elizabeth blogs at blueandwhitehome.com. Both her blog and her IG feed are populated with beautifully-appointed, mostly blue and white rooms. She’s traditional, sometimes with an edgier feel, and her daughter, who also contributes to the blog, has a similar aesthetic. Elizabeth also generously introduces a number of her favorite designers, like Caroline Gidiere Design. (Yes, I’m a little obsessed with this room: the gallery, the blue and white and that green!)

James T. Farmer is an interior designer, gardener, author and speaker whose work is always infused with a gracious, southern sensibilty. His IG is as likely to feature photos of his dog, whatever he’s cooking or eating, and/or his extended family and friends as it does images of his design work. This image says it all! (Check out his latest book, A Place to Call Home.)

Wouldn’t you love to attend or host a dinner party featuring this lovely table? Enough said. 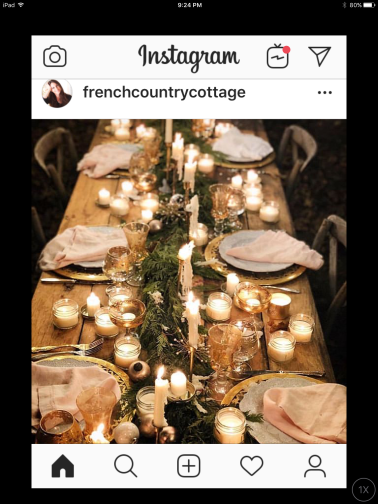 Finally, Joni Webb — whose awesome blog Cote de Texas is, well, awesome — posted this image (and several others) of an apartment belonging to the late Lee Radziwell. Is there anyone else out there, of a certain age I suppose, who heard a door quietly close at the news of her passing?

And that’s my lately. What are you doing to combat cabin fever?

Thanks for stopping by. See you again next time?

2 thoughts on “Lately: Reading, cooking, and decorating my way out of cabin fever”