We have not seen the sun here in Chicago for 10 or 12 days. It’s getting old. Really old.

It hasn’t been “Chicago cold” (sub-zero or at most in the teens) and there is no snow. And while I certainly don’t bemoan the absence of cold and snow, they at least provide a little drama. This is just bleak, damp, often rainy, and gray. Very, very gray.

What have I been up to, besides complaining? 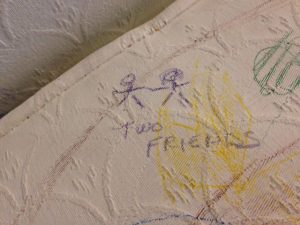 Last week one of my oldest friends, one I never get to see enough of, suggested we meet in Elmhurst (another Chicago suburb) to check out exhibits at the local art museum and historical society. What a great day she planned for us!

The art museum is connected to the Mies van der Rohe McCormick House (one of only three houses that he built in the United States) which it acquired some time ago. The pairing of the house with the museum reflects the museum’s philosophy that “people from all walks of life and professions can learn how to see and to think differently through the study of art, architecture and design.”

The exhibit we saw is called “Sense of Place,” and it’s designed to consider the various ways we “map the places of our lives.” It also celebrates the museum’s 20th anniversary by recognizing its founding artists. I have to say, Laura and I were both (a) impressed by the museum and (b) taken aback by the opening gallery in this exhibit, a residential room, completely washed in white paint — chairs, sofa, tables, lamps, books. And it invited visitors to leave their mark, so to speak, using available crayons or colored pencils, to doodle, scribble, whatever. (Mine is at the start of this post.)

Since the exhibition opened in December, it was already heavily doodled. In fact, finding a blank space for our own doodles was tricky. And I honestly don’t know which I found more unnerving, the totally white background or the scribbles everywhere. What do you think? (This was called Welcome Home Coloring Book, by Donna Castellanos, mixed media, colored pencils, salvaged furnishings.) I think initially at least Laura and I both started channeling our mother/grandmother selves, “you wrote on what?” 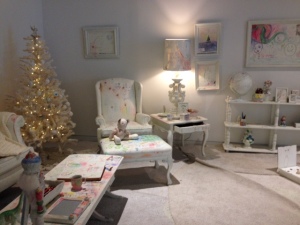 The exhibit as a whole (it included 39 artists, some with more than one work) offered a genuinely diverse view of “Sense of Place,” everything from video to collage to oil on canvas. (And this is where I wish I’d taken more photos, but I just got caught up in looking! And I have to apologize for what I do have here, it’s pretty paltry.)

We both loved this oil on canvas, Best Medicine, by Cassandra Swierenga. Did we like it because it was a familiar medium, great color, a happy, loving moment between a mother and three daughters? Probably all of the above. It seems reminiscent of a time and place you have experienced and hope to again. 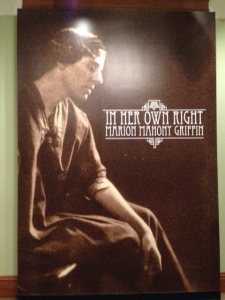 After the art museum, we stopped for lunch at a wonderful restaurant, then walked over to the Elmhurst History Museum to acquaint ourselves with Marion Mahony Griffin (1871-1961), one of the country’s first female architects and a central figure in the Prairie School of Architecture. It’s impossible to overlook the impact of architecture on Chicago, particularly the Prairie School and Frank Lloyd Wright, but Marion Mahony Griffon was a revelation to us.

Marion Mahony was Wright’s first employee and a key member of his Oak Park Studio for 15 years, but her work, as well as that of others in the studio was downplayed by Wright. Interestingly, her senior project at MIT was the design for this home and studio. If you visit the Wright home and studio in Oak Park, built somewhat later, it’s impossible to ignore the similarities.

According to Wikipedia, when Wright left his first wife and fled to Europe with his second in 1909, he offered the Studio’s commissions to Mahony. Although she declined, she was subsequently hired by Hermann V. von Holst, who had accepted the work. In this capacity, she retained design control and was the architect for a number of commissions Wright had abandoned. She eventually partnered with Walter Burley Griffin on a number of projects. Mahony and Griffin married in 191l, eventually taking their prairie style to projects in India and Australia. After Griffin’s death in 1937, she completed their unfinished commissions but did little more to further her own career.

In so many ways, it seems, Marion Mahony Griffin’s talent was co-opted by the men around her. And that’s a familiar story.  I’m so glad we “discovered” her! 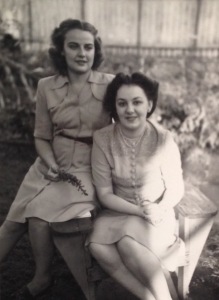 I’ve been thinking abut this post for some time. Last spring I reconnected with two old friends. It made me think about the friendship between my mother and her best friend and what it taught me about friendship.

My mother first met her best friend when she was just 3 or 4 years old. At the time, Mom spoke English, and Lil spoke only German. (Not at all unusual in their pre-depression era Chicago neighborhood.) But you know kids, a doll is a doll and pretend is the same in any language and they became friends. Lil moved away for several years, before moving back across the street in time for them to be high school buddies. They were best friends until my mother died at age 89. Mom used to say that their friendship as adults was helped by the fact that their husbands and kids got along, and I’m sure she was right about that. But I also think it was a long, shared history, a healthy respect for their differences, and their determination to not let the friendship ball drop. (That’s Mom, left, and Lil, in a WWII-era photo. )

I learned an important lesson from them. Friendship has to be elastic to accommodate changes large and small throughout a lifetime.

This spring I had lunch with a high school girlfriend I had not seen in decades. We rekindled our friendship on FaceBook in a group for an upcoming class reunion (it’s a whopper!) and that in itself is amazing since I am terrible at FaceBook. It turns out that we both have adult children and grandchildren living in the same  city. (Which I guess means we also could have run into each other in a Columbus, Ohio, Barnes & Noble!)

As sometimes happens with old friends who knew you best and knew you when, time stopped and we picked up our conversation as if it was never interrupted by husbands, children, and careers. This is someone I went to Sunday school with and to algebra class, we sewed together and worked on the year book, and eventually we began to shape what would become our adult lives.

We didn’t waste time reminiscing; we were too busy filling each other in on the last few decades. As we recounted the joys and challenges of raising children, working inside and outside the home, and negotiating life with our aging parents, we realized we had traveled parallel paths and operated with the same values that had launched us years ago. There are some things that just never change.

So, Pris and I sat in a Panera Bread, talking for four and a half hours. Even then we only stopped because we had long drives home. And it got me thinking about the friends we leave behind however unintentionally because we get busy, move away, have babies, take another job.

Sometimes life just gets in the way of friendship.

A few weeks after lunching with Pris, my friend Barb and her husband were in town to visit family and they met us for breakfast. Barb is my Lil, my friend who lived down the street the whole time we were growing up. We spent as much time at each other’s houses as we did at our own. We have moved off in different directions any number of times, but always manage to reconnect. We just resume the conversation.  (Which sometimes requires a marathon phone call!)

(Here we are, in late grade school I think. I’m on the left. And since neither of us has ever had a naturally curly hair on our head, I’m sure that was taken shortly after our mothers had worked their “home permanent” magic!)

Barb and I don’t just know each other well, we know each other’s extended families, and family histories. We understand, without asking questions, the little mini-dramas that play out. We share and laugh over memories that even our husbands can’t appreciate, because after 40-odd years of marriage to our spouses, Barb and I have known each other longer. We mourn each other’s losses as our own (Our breakfast together was all the more heart-warming since our last meeting had been for her father’s memorial service) and share our joys (we became grandmothers at about the same time).

There really are friends with whom you can lose touch for many months, then pick up the conversation as if it never ended.

Friendship is so quirky. Some friends pass in and out of our lives easily. We work together but then one moves on to a new job, or we have kids in the same class or on the same team, but then they grow up. And that’s okay, because I think we are  enriched by any friendship.

But then there are the others, happily, that are with us forever. One of the real rewards of retirement, for me at least, has been the opportunity to spend more time with friends and nurture the friendships old and new that I often just didn’t have time for during those demanding career years. It’s a wonderful and surprising bonus!