Perhaps you’ve noticed? I’ve been in a bit of a blog funk, waiting for a spring that teased rather than settling in, getting caught up in a big round of volunteer meetings, and more. But I’m back. And here are the looks, cooks, and books I’ve been up to lately.

Digging in the dirt

It happens every spring. Like the fans who love getting back to baseball, I’m eager to get out to my garden. The season is short in Chicago, so you need to make the time count. I love seeing the perennials push their way up each spring, unfolding and leafing out. I worry over gaps, where a plant didn’t survive the winter or where I made a note last year to fill in with another specimen. I love this! It’s like styling a bookshelf or tabletop, but with plants in the dirt.

This year the cool, rainy spring has been both blessing and curse. The good news is that many of the perennials like hostas, dallies, and astilbes have loved the cool, wet spring. They are bigger than ever and many need to be divided. The bad news is that it is absolutely squishy and muddy in most of the yard. It’s just too wet to work.

I’m also challenging the familiar garden pot recipe — a thriller, a filler and a spiller — in patio pots this year. I did some like that and then planted a few others with just one kind of plant per pot. I had this idea last year, but didn’t quite get it done, so this year I planted two pots with nothing but cosmos. And I filled another pot with three marguerites, though I also tucked in some alyssum around the edges. They’re doing well, but the plants need to get bigger to make more of a statement.

You’re probably saying, been there, done that. Well, I didn’t. (And I didn’t watch the movies either. I was waiting until I read the books!) Now that our eight-year-old grandson has started reading them, I’m catching up. I totally understand what the fuss is about because these are wonderful characters and stories. Second, and even better, it’s just so much fun sharing this discovery with Jack! He’s well ahead of me (of course), but a great cheerleader so I’ll be catching up.

When I finished Harry, I went on to The Seven Husbands of Evelyn Hugo by Taylor Jenkins Reid. This was the choice of one of the readers in a small, informal book group I meet with. Our choices are all over the map: fiction, non-fiction, especially biography, and sometimes we skip a book and watch a film together instead. This is a page-turner, about an aging Hollywood legend telling her life story — which includes seven husbands! — to a much younger writer mysteriously selected for the job. Check it out!

Two from my kitchen

When it’s too rainy to be outside (and we’ve had a lot of rain, have you?), I play in the kitchen. I discovered this recipe for copycat Starbucks blueberry muffins on the Cafe Sucre Farine. I happen to love those muffins (and have eaten more than my fair share of them), so I decided to see how close they really come. Well. they’re awesome and they do bake up with these lovely puffy, crunchy tops. There are a few extra steps in this recipe, but I think they’re worth it.

I’ve also been perfecting this chicken dish, recommended by Elizabeth at Blue & White Home. It began as a Southern Living sheet pan recipe using chicken thighs and drumsticks. And in that incarnation (check their website for Lemon-Rosemay-Garlic Chicken and Potatoes) I agree with Elizabeth that it’s perfect for serving a family or friends.

I wanted to try using white meat (my husband’s preference) in a smaller quantity. I’ve now made it three times, tweaking a bit each time. I used two, skin-on, bone -in chicken breasts (more than enough for our dinner and leftovers for a salad or two for me later in the week). While the oven preheated to 450, I browned the chicken pieces skin-side down along with a few handfuls of small potatoes, halved, in a small amount of olive oil. Use a pan than can go right into the hot oven.

While the chicken was browning I mixed 1/3 cup of olive oil, the juice of 1 lemon (about 1/4 cup), half of a 3.5 ounce jar of capers drained, 4 smashed garlic cloves, and a generous tablespoon of fresh rosemary. I also sliced up another lemon and added that to the mix.

When the chicken was browned on one side, I turned chicken skin side up, poured the lemon/oil/herb mix over all and put the pan into the hot oven. It took about 40 minutes to reach 165 degrees. (It could be longer if you have more pieces in a larger pan). When it was done, I took the chicken and potatoes out and added a generous splash of white wine and a pat of butter to the pan juices and stirred and simmered for a few minutes until both were incorporated. I spooned this “sauce” over the plated chicken and potatoes. Voila! Dinner is served.

Some days Instagram is so full of great images, I just have to save some. I have always loved a sunroom, especially with a black & white floor, but this one with the baby grand breaks all the rules! 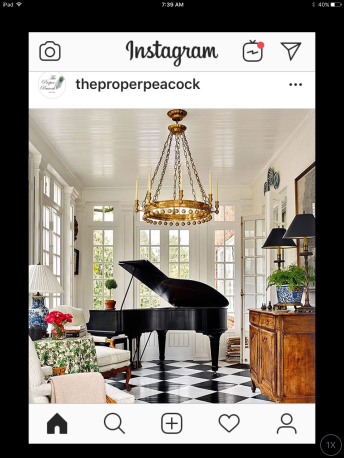 And then there is this beautiful vintage frame, with the asymmetrical arrangement of blue and white. (Yes, I’m trying to figure how to duplicate it!)

And finally, I just can’t resist a pretty windowbox! 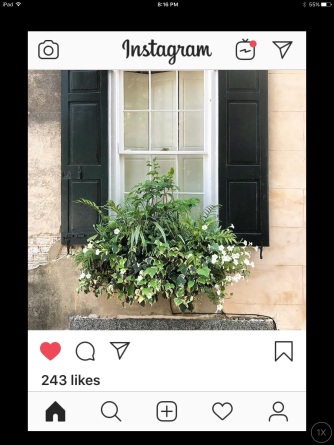 How was your May? And what’s your plan for June?

Thanks for stopping by. See you again soon!

One thought on “Looks, cooks, and books from May”