If you follow me on Instagram, you know we recently traveled to France and you also probably saw my post about the French castle that is, sadly, not in our family. But, in sixteen days of wonderful sights, sounds, tastes and people, the morning we spent at Sercy Castle has to be among the best of the best.

A bit of the back story.

Last year I gave my husband an international membership to Ancestry.com so he could pursue his mother’s family roots in Europe. The genealogical research was full of surprises, not the least of which was this castle in Sercy, France. In truth, the Castle Sercy part of the story required a few “leaps of faith” to get to the 12th century, but it was fun to pursue. In reality, our visit here was absolutely wonderful (and, no, these are not the right Sercy’s!).

I’m not sure what I expected. We had seen a few Google pictures on the web, but when we came around the bend in the road on this particular morning and saw the castle in person, I was totally blown away. A stone castle, with turrets and a diminutive lake out front! As one friend noted, it’s just like Cinderella! But of course, it’s very real with a very interesting history.

Castle Sercy is a 12th-century structure, in Southern Burgundy near Tournus. Although it is not normally open to the public, except for certain special occasions, Steve had corresponded with the current owner and his welcome was genuinely gracious. The castle’s current owner, a retired naval officer and descendant of several centuries of owners, greeted us warmly and invited us into the small home he & his wife share on the property. (The castle has no running water or electricity, making residence there somewhat inconvnient.) Over coffee he shared some castle and family history.

Start in the 12th century

Construction on the Château de Sercy started in the 12th-century and continued for the next few hundred years. By 1470 the Château had become a fort with ramparts and a moat. The Sercy family owned the Château de Sercy (hence the name) from its initial construction until the 16th century when Philibert Sercy died in Lyon. The Château was subsequently uninhabited for over two hundred years and fell into ruin. It was sold in 1771 to a French army officer and then sold again in 1785 to an ancestor of the present owner.

Those owners were royalists who were beheaded during French Revolution (Really!). Their very young daughter was spared, but the castle was sacked, its furniture taken, its sculptures and fireplaces broken and archives burned. Later, after the daughter had grown and married, a major reconstruction took place from 1811 to 1815 and the Château de Sercy was inhabited once again. Much later, in 1929, a major fire destroyed much of the structure, although some of the best parts of the Château were saved. In 1954 the family began to rebuild, again.

The French government can classify a building or part(s) of a building as historically significant. Castle Sercy’s round, northwest tower with the raised roof supported by a substantial network of wood pillars and trusses, called a hoarding, was built sometime in the 15th century to defend the castle. It’s one of the oldest hoardings in France, making that part of the castle historically very significant.

We had access to a limited part of the interior, but the owner did share the original castle kitchen with us, along with the courtyard area which dates to the 12th and 15th centuries. Despite the lack of conveniences like electricity or running water, the owners do use the main salon in the summer, as well as an adjacent room. Interestingly, the fireplace in the main salon is also classified for historical preservation, and has been restored but fires are not permitted per the architect. 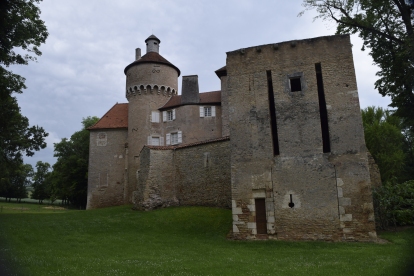 We walked the grounds to see where the castle walls had once been and the moat beyond the walls. We also visited the castle’s Romanesque chapel where generations of forebears are buried. The chapel walls and ceiling are beautifully decorated in great detail.

Rather than being disappointed that our family is not related to the castle’s original owners (which really was long shot!), Steve and I were both totally charmed by our time at Sercy and honored to have the opportunity to visit. It was a remarkable look at castle life “then and now” as well as a very personal lesson in one family’s French history.

Thanks for coming along.

4 thoughts on “We almost had a castle in France”