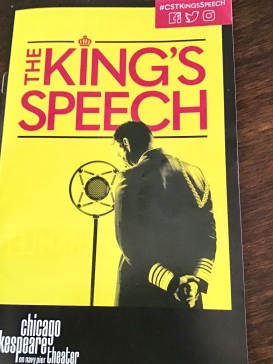 Lately I have found myself on a bit of a culture course. And while I’m certainly not complaining, I am amused at how things sometimes come together. The last few weeks are a good example.

One of the advantages of living in a big city is the access to cultural and entertainment venues. And while that is certainly true, it’s also true that making the time, getting the tickets, and all the other requisite details often get in the way of what the city has to offer. Our suburb is twenty miles west of downtown Chicago, and while we have easy access to the city by car or commuter train, it’s more than a run to the grocery for milk.

My binge started with tickets to see The King’s Speech at Chicago Shakespeare. Perhaps you have seen the movie about Prince Albert, the Duke of York and his struggle overcoming a crippling stutter at the same time his brother, the Prince of Wales, was about to abdicate the throne, making Albert the king as Europe was going to war with Hitler. (Talk about pressure!) The play was enjoying critical acclaim at Chicago’s Shakespeare Theater. Everything I have seen there has been first-rate and this production did not disappoint, including the appearance of Harry Hadden-Paton, of The Crown and Downton Abbey, as Albert. My husband and I totally enjoyed the evening.

But then, less than a week later, I found myself at Symphony Hall. I am joining a girlfriend this season in a series of five concerts. She has been a subscriber for years, but her partner in this venture decided not to participate this season. The seats are good, and the cost when you subscribe ahead of time is do-able, so of course I said yes. Well, these seats are more than good; they’re in the fourth row. I can watch the violinists finger their instruments. We park in the garage across the street, grab a bite to eat and sit back and enjoy. I may be hooked!

My usual cultural destination in the city has always been the Art Institute. (I’ve written about various visits here, including the Thorne Miniature rooms, John Singer Sargent and Gauguin in my Miscellaneous File. ) A year or so ago friends introduced us to a monthly lecture/discussion series at the AI. We are all retired, so when schedules allow we meet there to attend the series and enjoy lunch after. Last Friday was especially appealing, because a new Andy Warhol exhibit has just opened. We met early to see as much of Andy Warhol-From A to B and Back Again as possible before the regular lecture. But we may need to go back, because this is an extensive exhibit that takes the visitor well beyond Warhol’s prints of Marilyn Monroe and Jackie Kennedy.

I wish I had done a little AW research before we went (Note to self: next time do a little homework.) Warhol’s much more than just a pop icon of the sixties, although that certainly describes much of his work. Unlike other artists, Warhol began his career doing commercial art. His first commission was drawing shoes for Glamour magazine in the 1950s, followed by work as a shoe designer for manufacturer Israel Miller.

Much of Warhol’s later work continued to be based on commercial art, like the Campbell’s soup cans and the Brillo boxes. He was well known for his silk screen process. Many of those pieces, including the famous and familiar Marilyn Monroe image, were based on commercial photos that he copied and successfully turned into iconic images using a silk screen process. (The Marilyn Monroe image was originally a studio publicity shot for her last movie.) The silk-screened portraits, in fact, became so popular that movie stars, public and private figures came to Warhol for what he referred to as “commercial business.”

In addition to the individual portraits, Warhol often produced multiple versions in one work, sometimes with slight variation in color and/or shading.

This oversized portrait of Mao Zedong (it’s about 125-feet tall) is part of The Art Institute’s permanent collection. The Institute’s archive notes that Warhol’s portrait displays some irreverence towards the image that was widely displayed in China: “Flamboyant brushstrokes compete with the photographic image, forming color splashes on Mao’s clothing. Red rouge and blue eye shadow resemble graffiti.” Some art historians view Warhol’s treatment here as commentary on similarities between Communist propaganda to capitalist advertising media.

Like so many artists, Warhol’s artistic muse went well beyond the canvas. He spent most of his later years exploring videos and movies. Warhol died at only 58, so it’s interesting to speculate on where his art would have taken him. Like many gallery-goers, I’m more drawn to Renoir and Monet than Warhol. But there is no denying the impact Warhol has had on the art world. He used techniques like silk screen and video and blurred the lines between commercial art and fine art. And that alone is saying a lot.

What about you? What kind of art are you most drawn to?

So much for my culture binge. It’s time to take a deep dive into holiday prep, a.k.a. oven cleaning. Thanks for stopping by. See you again soon?