Last week Steve and I finally went to see the John Singer Sargent exhibit at the Chicago Art Institute. It’s a relatively small show compared to others mounted by the AI, but with a interesting cross section of his work. After reviewing his work and doing a little more research, I’m struck by how “American” his work seems, although he spent most of his life in a variety of European cities. Tell me what you think.

Most of us think of Sargent as the painter of Gilded Age portraits. And these he did beautifully. The facial expression, body language and clothing in each is remarkable and distinctive. No wonder he was so “in demand” from a relatively early age.

But before Sargent began accepting portrait commissions, he honed his skills on other works. Street in Venice, 1882, below, is one of several paintings he completed while painting there. (Although Sargent was American-born, his parents took him to Europe as a young child; the family remained there permanently.) I think it’s impossible to escape the moodiness here, or not wonder about the stories behind these three characters.

La Carmencita, 1890, is a more glamorous portrait of dancer Carmen Douset which captures her haughty (or is it defiant?) expression as well as a theatrical pose in equally theatrical dress.

When I think of John Singer Sargent portraits, I think of traditional works like this, Mrs. Edward L. Davis and her son Livingston Davis, painted in 1890. I like the crisp black and white here and the silky texture of her skirt versus the somewhat rumpled suit her son is wearing. And, most important, I think the pose looks totally natural: Mother with her hand on her hip, son just leaning into her. 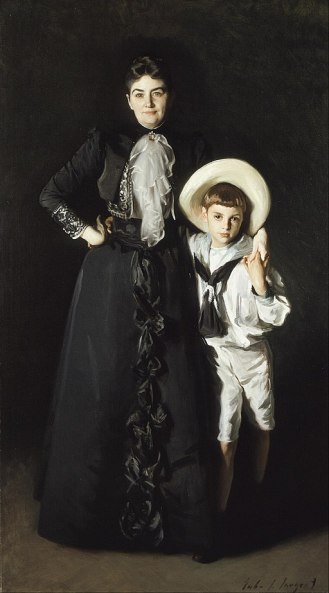 Two years before the Davis portrait, Singer Sargent painted this portrait of Alice Vanderbilt (later Vanderbilt Morris) of the Vanderbilts when she was just 13. This seems a bit more traditional, but together with the Davis portrait, above, they are a clear representation of what we think of as “Gilded Age” portraits, from a time when new American money could buy the trappings of old European aristocracy. 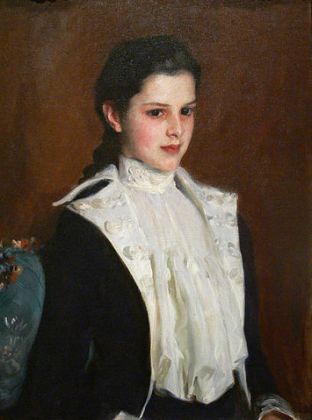 Shortly after the turn of the century, however, Singer Sargent stepped way from his successful portraiture commissions to spend more time in pursuit of plein air painting. Many of these pieces feature vivid watercolors, including a number of paintings from Venice. The Gondoliers Siesta, 1904, is a beautiful example. 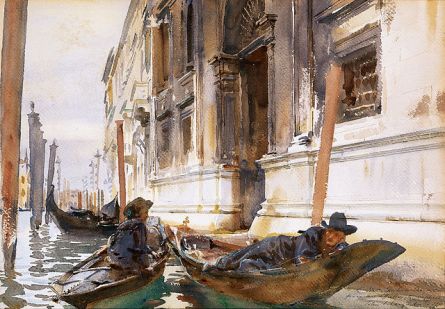 One of my favorites from the AI exhibition, The Fountain, Villa Tortonia, Frascati, Italy, 1907, captures Sargent’s transition from portraitist to plein air painter. The couple are Wilfred and Jane Emmet de Glenn, professional artists and friends of Sargent. 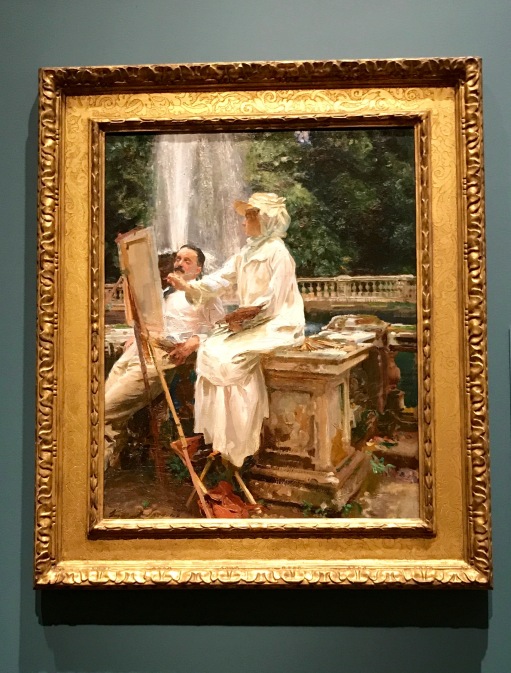 Sargent painted a series of watercolors much later while staying at the Florida estate, Vizcaya, of his friend and benefactor James Deering. One from the AI exhibition is The Terrace at Vizcaya, 1917. Here the color is much lighter, more “Florida.”

Despite living most of his life in Europe, John Singer Sargent never gave up his American citizenship, and painted many of the American political and industrial greats of his time. When I look at his paintings, especially his portraits, they seem to be very American: straightforward poses, not a lot of background, pretty much an American sensibility, but perhaps with the added polish of European training. What do you think?

The next field trip

Right now we are packing bags and maps before leaving on a long-awaited “road trip.” I hope you are following me on Instagram. I’ll be away from the blog but try to post often on IG!

Thanks for stopping by! See you next time – and on Instagram!

One thought on “Field trip!”