I was writing a lighthearted post when the coronavirus death toll passed 100,000. And while l was trying to wrap my head around that number, one man died on the street in Minneapolis. You know the rest. These have been terrible days and weeks. I am so sad about what’s happened, but also hopeful we meet this challenge. It will take a lot of work. I especially hope you are well. Personally, I just felt numb for a while. Here’s what I’ve been doing to get back on track. 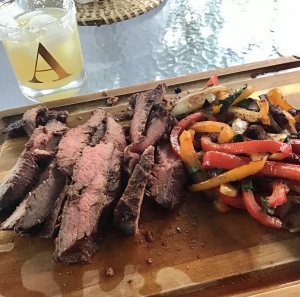 Our cooking adventures continue. Earlier this week I made steak fajitas from scratch using a recipe from the New York Times (My new favorite recipe source. I encourage you to sign up for their newsletter.).  First, this recipe was much easier than I expected and required standard ingredients from my kitchen. Who knew? The fajitas tasted even better than they look. (I should have tidied that serving board before snapping any photos.)

That is one of my husband’s tart margaritas in the glass. (He’s not fond of the sugar-y taste of other recipes and I think he has a good thing here!)

I have literally been nagging my garden and potted plants to grow and bloom. I could use the boost. And — I think they are starting to listen. Everything is very lush and green. This bed beside the house has been literally overrun with daisies and perennial geraniums. The awkward patch of green in the front are black-eyed Susans which typically burst into bloom when the daisies are done.  There are also some daylilies along the foundation. If anyone has some advice for getting this under control and maybe some order — without sacrificing bloom — I’m all ears.

This garden on the other side of the house is the picture of control, almost. There is that one monster hosta in the back. I should have divided and/or moved it early this spring. However, the astilbe are ready to bloom and about the time they fade, the hostas will be flowering.

My mother-in-law was the middle daughter in a family of five girls in a small, north Georgia town.  Their father (forever known as “Daddy” in true southern speak) was a rural mailman, originally traveling his route by horseback before acquiring a car. In the early thirties, as the second eldest daughter was about to graduate from high school, the principal and a teacher visited “Momma and Daddy” to explain to them that Clydene was really a smart girl and should go to college. They had no objections, but how would they pay for it? The solution was for Daddy to trade his mail route for one in Athens, Georgia, home to the university, so she could live at home and go to school. So the Hayes family rented their house and moved to Athens. Although the eldest daughter had already embarked on her adult life (and eventually ran the local Chevy dealer), the other four girls each graduated from the University of Georgia during the Depression. My mother-in-law actually taught in a one-room school to help cover her tuition on the way to becoming a teacher. Every time I tell this story I think about how devoted “Momma & Daddy” were to uproot the family and give their daughters the opportunity for a college education.

This weekend Sara, the youngest sister and the last survivor, passed away at the age of 98 (four out of five lived well into their 90’s). As the “Aunts” always pointed out, Sara was the tallest and, I think, perhaps the most mischievous. She was funny without trying to be and playful, which, of course, made her a favorite. Our kids loved her, as did our niece and nephew. The last time we were together she convinced my mother-in-law to play a duet with her on the piano in the lobby of the Holiday Inn in DeKalb, Georgia. Quintessential Aunt Sara.

I think of them now, reunited again, recalling pranks, telling stories, arguing over who makes the best Mississippi Mud Cake. I am honored to have been a tiny part of that family and so happy my son and daughter experienced their loving embrace.

There is a joy and strength in this story that makes me feel good, no matter how many times I tell it.

Thanks for stopping by. Take good care of yourself, and I’ll see you next time!

4 thoughts on “A little cooking, a little gardening, and the remarkable Hayes girls”