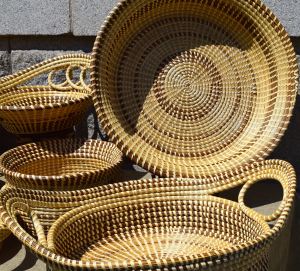 I suppose there are people out there who don’t like baskets, but honestly, I don’t know who they are or what they are thinking.

I began collecting baskets because they are an attractive, useful means of gathering and holding a variety of things. (Remember my post about Mary Emmerling?) Things like plants, onions, and sewing projects. Next, I acquired a few antique baskets, which I treasure. They are often fragile, but I find ways to use and enjoy them, like on top of cabinets where they can be seen but not touched. Then I found new, hand-crafted baskets. They’re pretty sturdy. I especially like large, utilitarian ones that can hold magazines or paper trash beside my desk. That way I can enjoy the basket maker’s artistry every day.

However, my sweetgrass baskets from South Carolina are the rockstars of my collection.

Sweetgrass baskets are fashioned from tightly coiled grasses and long-leaf pine needles at the hands of a small group of artisans. Each basket is one-of-a-kind. They are beautiful and functional on their own, but more importantly to me, they are an art form that has been passed down from generation to generation for more than 300 years.

A bit of history

In eighteenth-century South Carolina, the prosperous plantation lifestyle and its urban counterpart in Charleston owed much to the booming rice economy. And the rice economy depended on the labor and expertise of West African slaves, many of them rice planters in Africa before their captivity. They arrived in this country without personal belongings but holding close to the traditions and culture they had left behind, including basketmaking.

Originally made of bullrush and palm, which were prevalent in both Africa and in the South Carolina lowcountry, the basketmaking tradition allowed the West African slaves to continue an important cultural connection to their past. In addition, the baskets, like their knowledge of rice planting, were in high demand in the agricultural community. Flat, fanner baskets were used for winnowing rice. Large work baskets were used to store and transport a variety of materials.

Soon these baskets were incorporated into more domestic uses and new designs, like covered sewing baskets and bread baskets, began to appear. Basketry was an important skill in the slave community. There is evidence to suggest that some slaves were allowed to make and sell some of their wares. 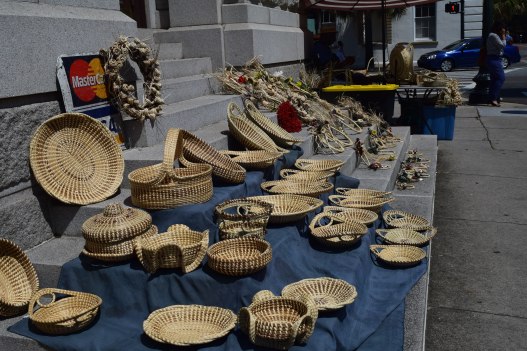 Despite the eventual decline of the plantation economy, the basketmaking tradition continued, though the products were smaller and more suited to household use. Sweetgrasss began to replace the bullrush and long leaf pine needles were added to make the coiled designs more interesting. In the early thirties, when increased car travel brought more tourists to the Mount Pleasant area just north of Charleston, interest in the craft increased and the first roadside basket stands appeared. Many of them remain today. Contemporary basketmakers also sell their wares at the Charleston City Market and at the “four corners of the law” at Meeting and Broad Streets (above). I’ve probably bought most of my baskets at this last location.

Putting a value on tradition

There are no written instructions for making a sweetgrass basket. This is a tradition handed down from generation to generation, and the basketmaker’s wares are distinguished by his or her expertise and personal style. Each of my baskets was handmade by someone who learned her craft from a mother or grandmother, who learned it from her mother or grandmother and so on. This is what makes them so valuable to me. Watch a basketmaker at work (and they are always working on another basket) and you can see what a painstaking project each basket is and the skill required. Even the simplest designs can take a dozen or more hours to complete. Larger designs take much more.

Although many basketmakers make what seem to be the same styles (probably dictated by what buyers want), the closer you look, the more differences you see. Some are woven tighter than others, some have little knots as embellishments, many are clearly designed to hold popular casseroles or baking pans.

I tend to favor simpler designs, that will still offer some utilitarian use. My first pieces of sweetgrass were actually two trivets. (Twenty-plus years later, we continue to use them almost daily, which I suppose says a lot about their sturdiness and usefulness.) This year I spent some time at the City Market (at the Meeting Street end) talking with basketmakers Corey Alston and his sister Charlene. They pointed out some of their work with newer, “fancier” designs and a few much more traditional pieces, including an almost flat fanner that I continue to dream about but just could not afford.

Sweetgrass baskets are what my mother would call “pricey.” Few fall in the $50 range and many designs are hundreds, even thousands of dollars. I looked at baskets for years before I bought anything beyond my trivets. Eventually I set aside birthday money and added to it to purchase one of the designs I had been eyeing. (It was all downhill for me after that!)

In addition to the time and skill necessary to make each basket, the sweetgrass (which really has a distinctive, sweet or fresh smell when you “stick your nose into a basket” as my husband says) itself is harder to come by. Once plentiful in the lowcountry marshes, the plants have been threatened by growing development, although now I believe it is somewhat protected.

Many basketmakers are willing to negotiate prices for serious buyers, especially on expensive pieces. While I always negotiate (it’s part of the fun), I do so when I am committed to a purchase. I don’t negotiate a lower price, then walk away to “think it over.” I am very conscious that I’m not just buying a basket or even a significant African-American craft. I’m investing in a one-of-a-kind, hand-crafted piece of art, part of a tradition that will hopefully continue indefinitely.

I’m also aware that I’m very, very lucky to collect these woven “rock stars.” Do you have a “rock star” collection or one you would like to start? I’d love to hear about it!

5 thoughts on “A sweetgrass story”