I spent so much time talking (and talking and talking) about Italy, that I did not get a chance to tell you about this wonderful exhibition of costumes from Downton Abbey. The last Downton episode may have aired a few months ago, but the magic continues. In Chicago this spring, it has been especially easy to indulge our English country house fantasies with a wonderful exhibit, “Dressing Downton: Changing Fashion for Changing Times,” featuring more than 35 costumes from the award-winning series.

Last week one of my best fashion- and Downton-loving friends and I were finally able to visit this exhibit. (And not a minute too soon because it was about to close.) We’re so glad we went! Seeing the clothes that played such a huge part in the series was wonderful, but the setting at the Driehaus Museum and the production quality of the exhibit itself were both spot on.

First let me say that the setting for the exhibition, Chicago’s Driehaus Museum, provided a perfect backdrop. The museum was the “Gilded Age” home of banker Samuel Mayo Nickerson. It has been restored by philanthropist Richard H. Driehaus and today showcases both original furnishings and pieces from the Driehaus Collection of Fine and Decorative Arts. Although it’s nothing like the grandeur of Highclere Castle where Downton Abbey was filmed, the time period was perfect. So was the staging. Each costume vignette was paired with an oversized still photo of a scene in which the costume was worn. We relived moments from the show as we viewed the costumes!

This image of Robert Crowley, Earl of Grantham, and Cora Crowley, Duchess of Grantham, is from the first season, I think. They are dressed for the Downton Village Flower Show. I loved Cora’s dress here, the detail in the black faggoting was wonderful! (Okay, I do have a soft spot for black and white dressing.) And look at how beautifully the silk drapes on the mannequin and in the photo. 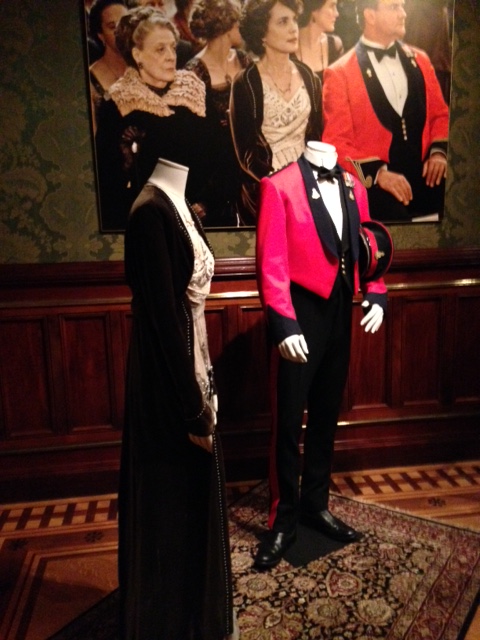 Another vignette features Robert in his military uniform, invented for the story but based on actual uniforms worn at the time. Cora’s dress features a piece of vintage fabric beaded with glass diamonds, pearls and seed beads. Clothes from that time were made to last and were well cared for, so re-making new clothes from old, using dress panels, lace and even ribbons was common. I know my grandmother was adept at doing that, largely out of necessity in the Depression, but I haven’t thought of it myself. Perhaps I should? But first I’ll need to get something with hand beading.

The servants’ side of the Downton storyline was well-represented by these outfits worn by Barrow and Mrs. Hughes: formal, proper, severe. Pick an adjective. This is the way they dressed all the time!

I admired the way Lady Edith Crawley embraced the changes and opportunities WWI and the post-war years brought to women’s lives. Here she is wearing trousers, but so elegantly with boots, gloves, velvet-trimmed coat, etc. You may recall she also learned to drive and even drove a tractor on the estate to help with farming chores while the men were off at war.

The skirt and blouse, center, worn by Lady Mary, is an interesting example of how the show’s costumers put the outfits together. Many pieces of clothing are original to the period, and therefore fragile. In this case, the chiffon print used on the blouse front was “rescued” from an unwearable garment and sewn onto the front of another blouse.

Cora’s velvet dress, worn when she escorted Lady Rose for her presentation at Court, has original lace and beadwork from the 1920’s. Interestingly, I read that the three white ostrich feathers were a requirement for both the debutantes and their escorts at Court! I have no idea why, but it’s worth investigating.

This may have been my favorite! Lady Rose’s dress is reminiscent of the “flapper” style and is also original to the period. It’s silk velvet with glass beads and sequins and also much shorter than what everyone has been wearing. She’s portrayed here with the American jazz singer and musician Jack Ross. Together they caused quite a stir, which pretty much describes Rose most of the time!

You can see why we loved this exhibit. It gave us a wonderful opportunity to step back into the world of Downton Abbey. As I have gone back over the photos, I have been thinking about how much we count on fashion to set the stage, good or bad. So, now I’m wondering, what are people going to say about our clothes in 100 years?