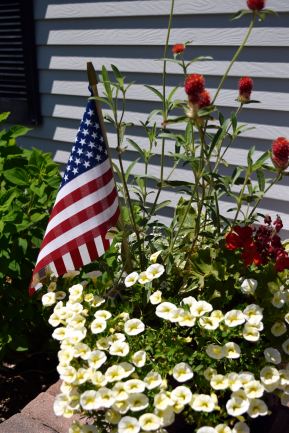 My grandfather was a WWI veteran and a founding member of the William McKinley American Legion Post in Chicago. When he died in 1988, his friends from the post showed up to honor him as pallbearers. When the minister had finished his blessing at the cemetery and was about to send the mourners to lunch, one of the legion members, a little white-haired man (in his nineties I imagine, as Grandpa had been) with his legion cap at a rakish angle, stepped forwarded and admonished the minister to “Hold on sonny.” Then he produced a tape player, pushed a button, and played Taps. (And we all cried a little more. )

Several years later when my father-in-law died, he was buried at Arlington National Cemetery with military pallbearers and a 21-gun salute. It was a small, dignified and extremely moving ceremony. I had been to Arlington before as a tourist and I have been there since to bury my mother-in-law. It has never been possible for me to walk those rows of white markers without being silenced by the sense of duty, honor and loss that this military cemetery represents.

My dad was a WWII veteran and the only decoration on his grave marker, beyond his name and dates, is the insignia of the Army Corps of Engineers he so proudly wore. My uncle was also a WWII veteran and when he died a decade ago, my husband called the William McKinley American Legion Post, where he was also a member, and they showed up with flags and arranged for a sailor from Great Lakes to play Taps at his graveside. (Cue the tissues.)

None of these men were “suckers” or “losers.” Nor was the boy from across the street who played football with my son, went off to college and then joined the army. His job in Iraq was to locate and secure IED’s. He brought everyone on his team home safely.

They were soldiers and sailors who did their job. They were and are proud of the uniform and proud of their service. There are millions more veterans and service men and women, some surely more battle-tested than these.  And we are proud of all of them.

I have tried hard not to be political in this season. Politics don’t necessarily fit with my vision of Ivy & Ironstone. But the allegations from the White House, of “suckers” and “losers,” pale in the face of politics. And I understand that they are “allegations.” But, after the last three and a half years, is there any reason not to believe them?

10 thoughts on “Back on my soapbox”