My husband and I, along with our children and grandchildren, spent last week on Kiawah Island, South Carolina. It’s safe to call this a family tradition since we have taken this same vacation for almost all of the last 25-plus years. (Some people might call that a rut, but I like to think of it as a home away from home.)

We look forward each year to familiar days at the beach, bike rides on the island, and favorite restaurants, but each trip also seems to have its own adventures. (On the first morning of the first year my daughter-in-law joined us a baby shark was discovered swimming along the beach. We really worried that she’d never come back!) It’s the kind of place where a waiter in your favorite restaurant turns out to be the boy who lived across the street 20 years ago and an old friend from those mommy-and-me days walks by on the beach where you’ve settled in with a book. 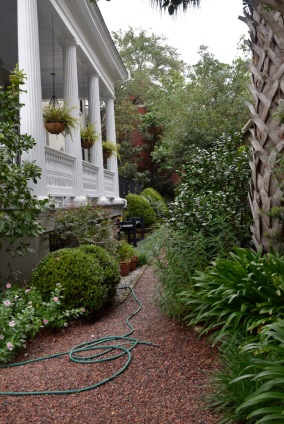 Part of the charm of Kiawah (apart from 10 miles of pristine beachfront, protected dunes and a lush, protected landscape devoid of chain stores or restaurants) is that it’s just 20 miles from Charleston, recently named (again) one of the top destinations in the US. We knew this early on. Charleston is ground zero for American history, foodies, and charm.

I am totally charmed by Charleston’s many gardens, some of them public, some more private, and some completely hidden. At this time of year they are very lush and green.

This year my husband and I were in Charleston a day ahead of the rest of the family and stopped for lunch at one of his favorite restaurants. We’d barely settled into our booth when another diner stopped by our table and asked if we were visitors.

Well, said the diner, I was just given two free passes for Fort Sumter but we’re leaving now. Can you use them? (A bit of history: Charleston’s harbor, where the Cooper and Ashley Rivers merge with the Atlantic Ocean, is also home to Fort Sumter, where the first shots of the Civil War were fired.)

This is one of the tricks of Charleston. The sense of polite, genteel hospitality Charlestonians are known for just starts rubbing off on everyone. And for history geeks like us, the passes were like finding money in the street.

We had been to Fort Sumter years ago, on one of our first trips. Our kids were in grade school then, and it was a very hot day. The best part was the boat ride out there and back; there was very little left of the fort. This time, our daughter, my husband and I made the trip one afternoon. It was not as hot and the boat ride was still fun, but we also appreciated the fort far more. We could not remember if there was a Park Ranger talk the first time around, but there is now and although it was short, we learned a lot.

Fort Sumter was built on a manmade island positioned to guard the all-important Charleston Harbor. After the War of 1812 the U.S. Army realized existing fortifications on either side of the harbor could not stop an attack on the city. Despite the fact that there is very little left of the fort, it was originally pretty large — three stories high and designed to accommodate a substantial number of men and even officers’ families. (It was not yet staffed except for Union troops who had secretly moved there from Fort Moultrie after Lincoln’s election.) After those legendary shots were fired April 12, 1861, and subsequent shelling, the Union Army was ultimately forced to surrender. However, this was still a “Gentleman’s War,” so, until he surrendered, U.S. Army Major Robert Anderson was allowed to receive supplies from the city and use telegraph lines there to communicate with his commanders. (This is, after all, Charleston.) After the surrender Anderson and the remaining soldiers were allowed to leave on a supply ship. They went to New York where they received a hero’s welcome.

And that’s how history unfolds…

For the last few years, my daughter and I have made a point of going into Charleston early one morning so we can walk and photograph the streets. Last year we did this on a very hot, humid Charleston morning and, after an hour or so, we were desperate for cool air. We turned a corner and there was the Nathaniel Russell House, one of the “house museums” operated by the Historic Charleston Foundation, so we went in and took the tour — again. We are “repeat offenders” because although houses like this are historic, they are not static. Continuing research, based on excavations, paint analyses, or even newly discovered documents or furniture often lead to changes in the house as well as its interpretation. (We really are history geeks!)

Last year we had passed the Calhoun Mansion and decided we should visit it next, so this year, after a walk that was far more comfortable (and at least 10-degrees cooler), we headed down Meeting Street in time for the first tour. We knew the house, built a few decades after the Civil War, was different than others we have toured (all pre-Civil War, often by many years). What we did not realize was just how different it would be.

A bit more history: the 23,000 square-foot house was built in the 1870s by George W. Williams, who had made a fortune as a merchant-turned-Civil War blockade runner. The docent who showed us around said the house was constructed in the early years of the Gilded Age (think Vanderbilt and Carnegie), when building mansions to hold vast collections of art, furniture and collectibles was common among men of certain stature. It became known as the Calhoun Mansion when Williams died, leaving the house to a daughter married to Patrick Calhoun, grandson of John C. Calhoun.

I wondered, out loud to the docent, how Charlestonians accepted this mansion in their midst. The city’s residents, once successful landowners and professionals living privileged lives, had suffered terribly during the Civil War and the city had struggled to survive. Post-war society was so polite that those who did have the means to repair or repaint their homes, did so sparingly, not wanting to embarrass friends and neighbors who could not afford to do the same. The docent pointed out that the construction employed hundreds of unemployed citizens for years.

The mansion is packed with furniture and collectibles, but almost none of it is original to the house. Those belongings were auctioned off after Calhoun suffered financial setbacks. The current owner, however, is an avid collector and has filled the house with the same vast quantities of “stuff.” The floors, the woodwork, the Tiffany chandeliers and the glass ceiling in the music room are all beautiful. But I found it hard to focus on most of it, along with the lovely collectibles, just because there was so much stuff. The collection ranges from Tiffany glassware and a Wedgewood-decked chandelier to Kibuki armor and English footstools made from the feet of real elephants. It’s dizzying.

People love it, but I was confused by the clutter and frankly a little “turned off” that a family really lives here part of the time and charges admission to allow tour groups. Am I weird? Probably. Perhaps I just want a “purist approach” to 19th-Century houses.

The gardens were beautiful, but on the whole I’d call this a miss. Interesting, but maybe not for the right reasons.

On the other hand, here are a few more shots from that morning in Charleston.

Whether you are traveling or staying close to home this season, I hope your summer features far more hits than misses!

Thanks for stopping by and see you next time!

2 thoughts on “A hit, a miss, and a tradition rolls on”